Published by Club Soda Records On October 22, 2011 Leave a response 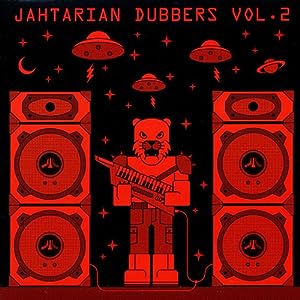 For those that like their dub digital, this is a great find. Jahtarian Dubbers Vol 2 is based around a lo-fi ethos with bass-lines run through a bit crusher and chords played on Casio-style keys, punctuated by bleeps and wails that sound like something off a Commodore 64 game. That’s not to say that the sound is cheap though, and alongside the more rambunctious party tracks are some haunting down-tempo numbers from the likes of Clause 4 and Black Chow. It’s released on the excellent Jahtari label, whose website is a joyful place to while away the hours, replete with some free downloads of some massive tunes, so well worth checking out.

A lot of people would say the birth of digital production in the 1980s was the beginning of the end for reggae music and it’s true that the absence of a live studio rhythm section did take away an essential element. But that’s not to say there weren’t some absolutely massive records from that era. In the early 1980s, dancehall began to emerge as an alternative to the more serious meditative Roots of the 70s, and the more traditional elements were merged with newer production techniques. Studio bands like the Roots Radics provided much of the backing for a slew of new producers, none more exciting than Henry ‘Junjo’ Lawes who produced albums for the likes of Gregory Isaacs, Yellowman, Eek-a-Mouse & Don Carlos and whose entire back catalogue is solid gold. Gradually though this gave way to a more solidly digital sound, with casio keyboards and drum machines replacing the studio riddims. It was of course cheaper and allowed studios to churn out singles quicker than they’d ever been able, and there was a lot of rubbish, but there were also some incredible tunes that still rock a soundsystem today. Spearheading the movement was producer King Jammy, who originated the Sleng Teng riddim and began to challenge Tubby as the heavyweight champion of Jamaican music production.  King Kong’s ‘Trouble Again’ is perhaps one of the finest albums to emerge from this time. There are also some great compilations exploring this era –  Firehouse Revolution: King Tubby’s Production in the Digital Era gives a great flavour of the tunes coming out of Tubby’s  firehouse label. Meanwhile over in the UK some

of the soundsystems were getting in on the act. Unity Sounds based in Hackney put out some seriously good digital dub and a  recent compilation, remastered by Rhythm & Sound’s Moritz Von Oswald, puts their best releases in the late 80s into an essential package.

Below is one of the highlights from the Jahtarian Dubbers album, Soom T’s “Puff that Weed” which is pure party madness, followed by “Paranoia”, a version of King Kong’s unsurpassed classic “Paro them Paro”, remixed in London for its clublands and finally the opener from the aforementioned Unity Sounds comp, Selah Collin’s beautiful “Pick a Sound”.